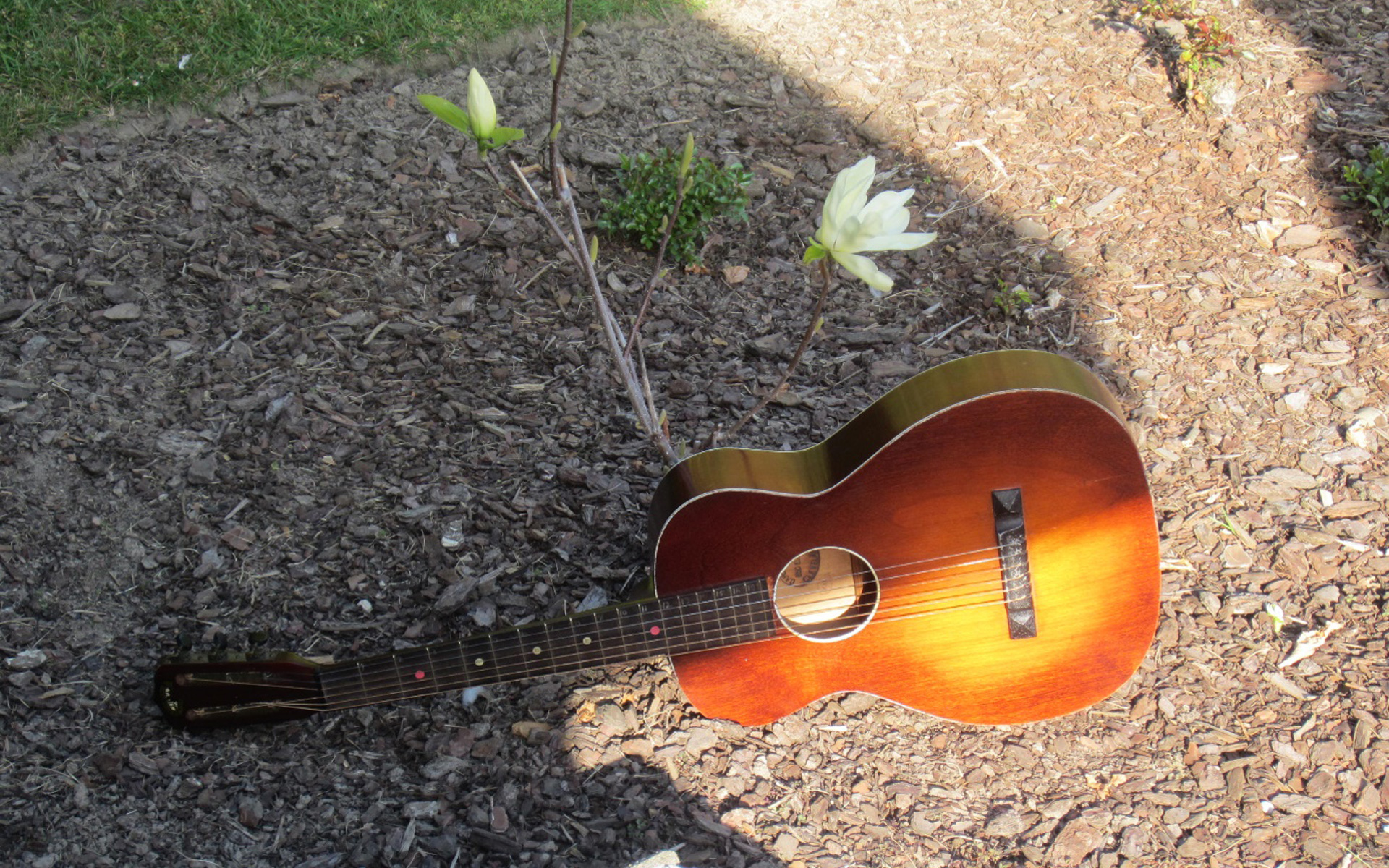 This guitar was bought at Gordy’s Music, 3341 Hilton Road at Ferndale Michigan, in May 2012. And paid by my son Gilles. These guitars were manufactured by the Oahu Publishing Company (Cleveland, Ohio). It was originally built for Oahu by the famous Oscar Schmidt Company, then by Harmony and later by Kay. The production ceased in 1985. It is what is usually called a Hawaiïan guitar, that is to say an instrument played on the lap with a steel bar – or a bottlenck – in open tunings. See Lorene Ryrmar and Joe Boyd, The Hawaiian Steel Guitar and its Great Hawaiian Musicians (Anaheim Hills : Centerstream Publishing, 1996).

Mine has this inscription in the soundhole, engraved by hot stamping: “Oahu Publishing and Co / 850 Euclid Ave / Cleveland Ohio.” 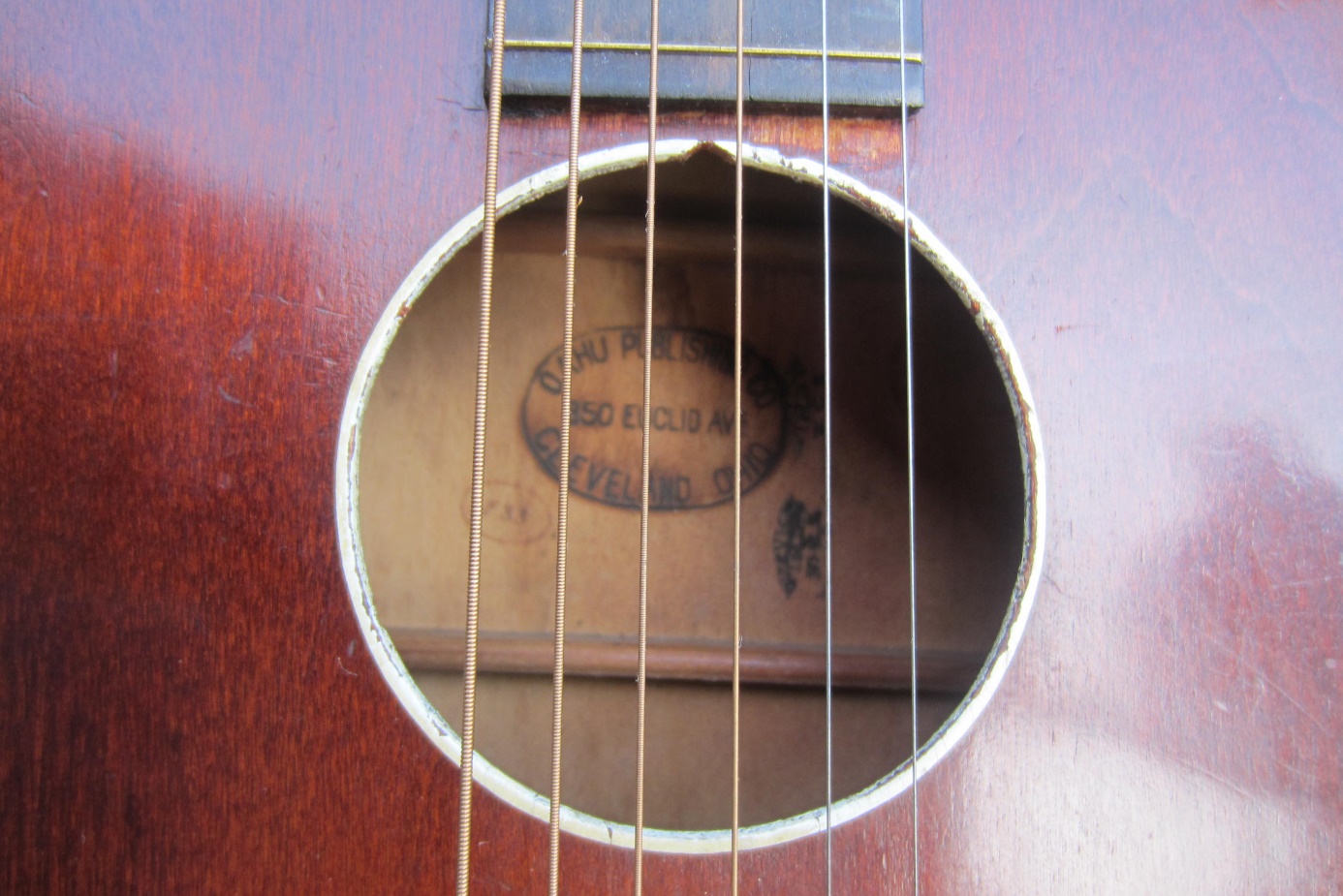 Euclid Avenue, one of the most important avenues of Cleveland, was called “Millionaire’s Row” due to the rich hotels built between 1860 and 1920. The building houses now a casino, “The Schofield” (see below)

The inscription in the soundhole is different according to the date of the guitar. One of the oldest copies which I have met on Internet is a supposed 1920s one, where is inscribed: “Oahu / Publishing Co./Cleveland.O.” 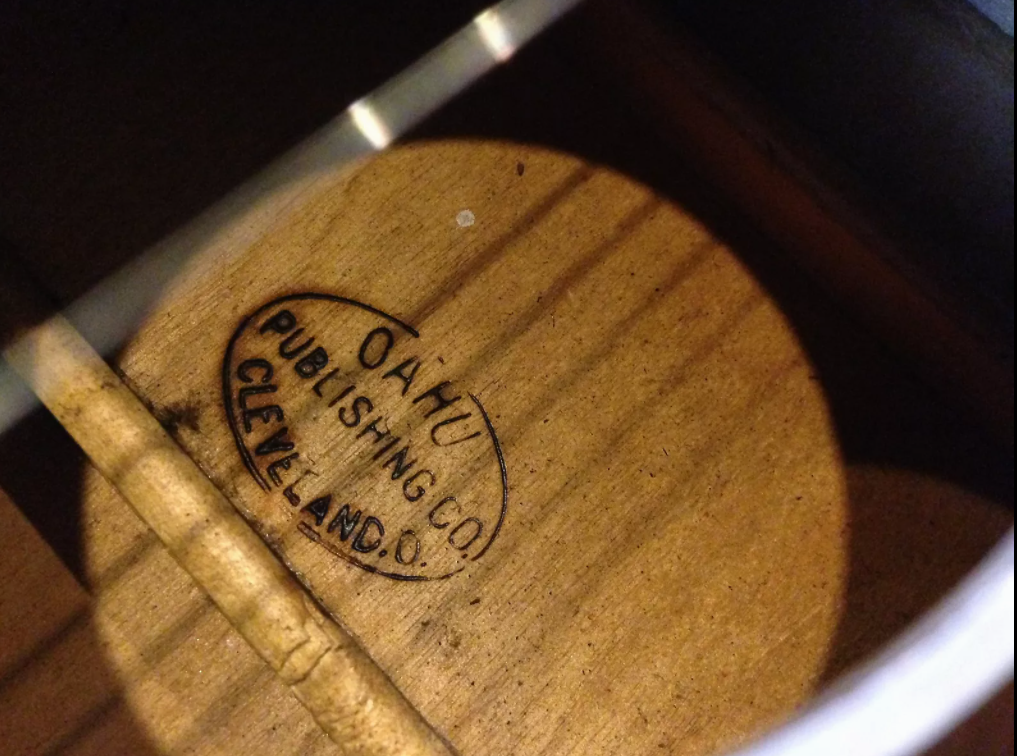 Oahu of 1920s. Sold by Billy Rocks Store, Ripley, Ohio, which I thank for information.

Another type of inscription is below, where Payne Ave has been subtituted to Euclid Avenue. 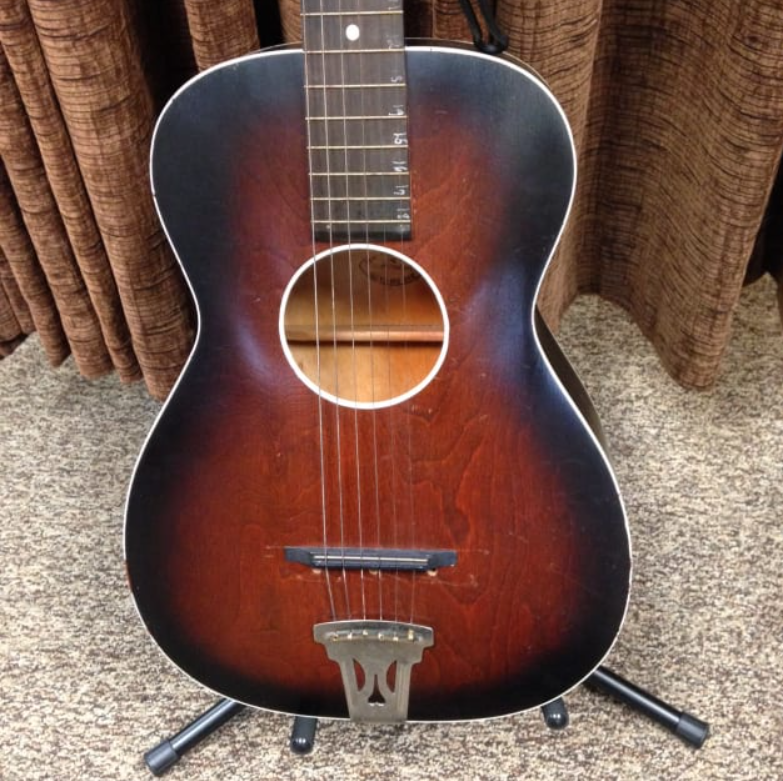 Oahu of 1939 sold by Yooptone Music, Marquette, Michigan, which I thank for information.

The brand on the head stock is also typical of the twenties and thirties. 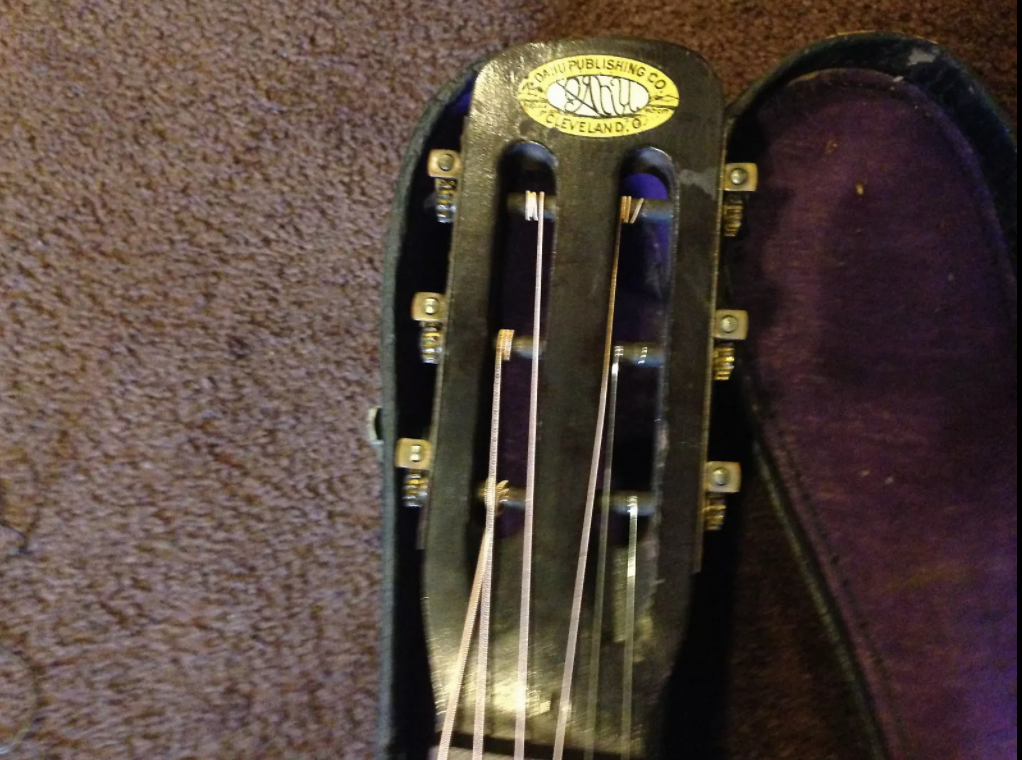 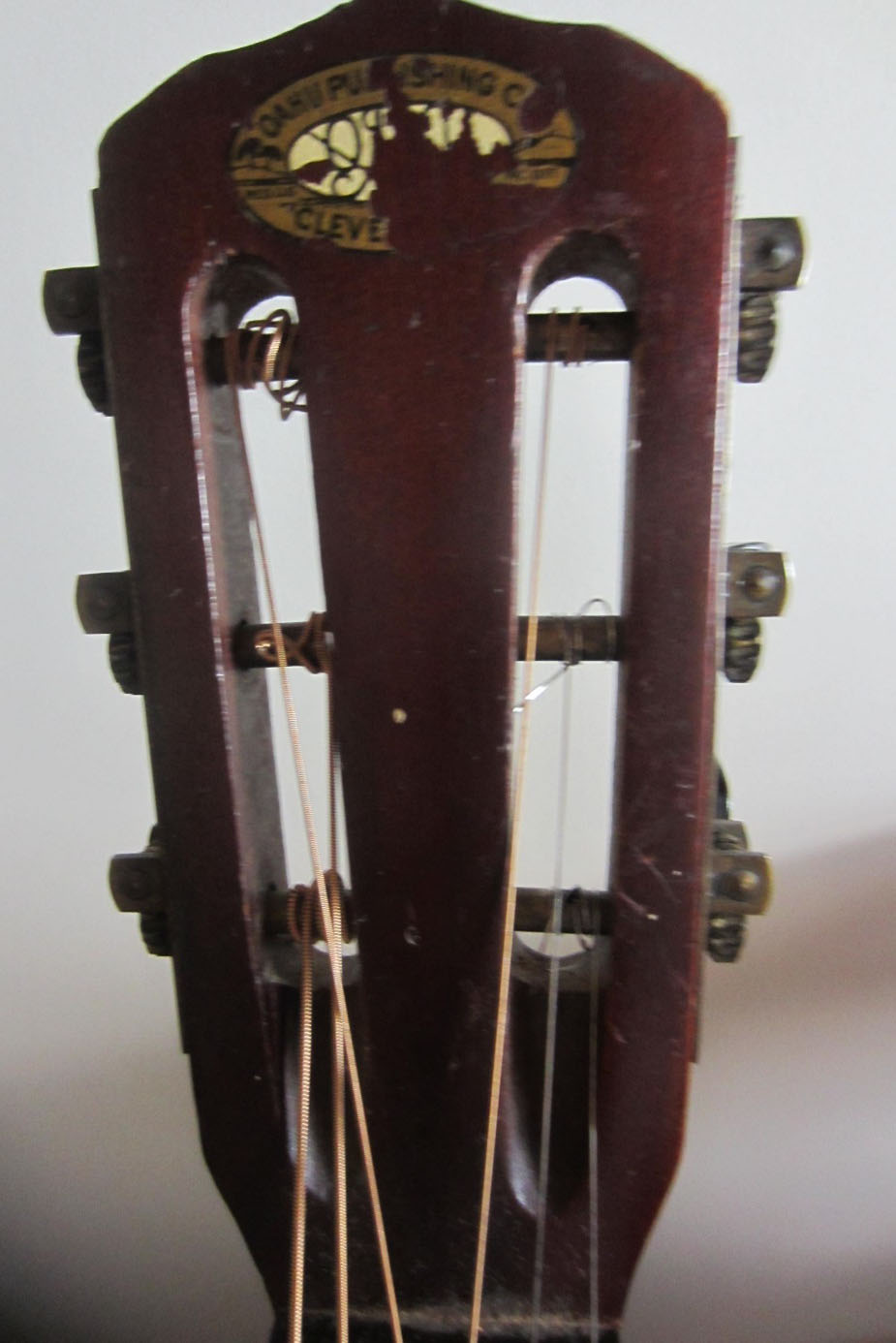 Another interesting feature is the inscription on the metal bridge/saddle. 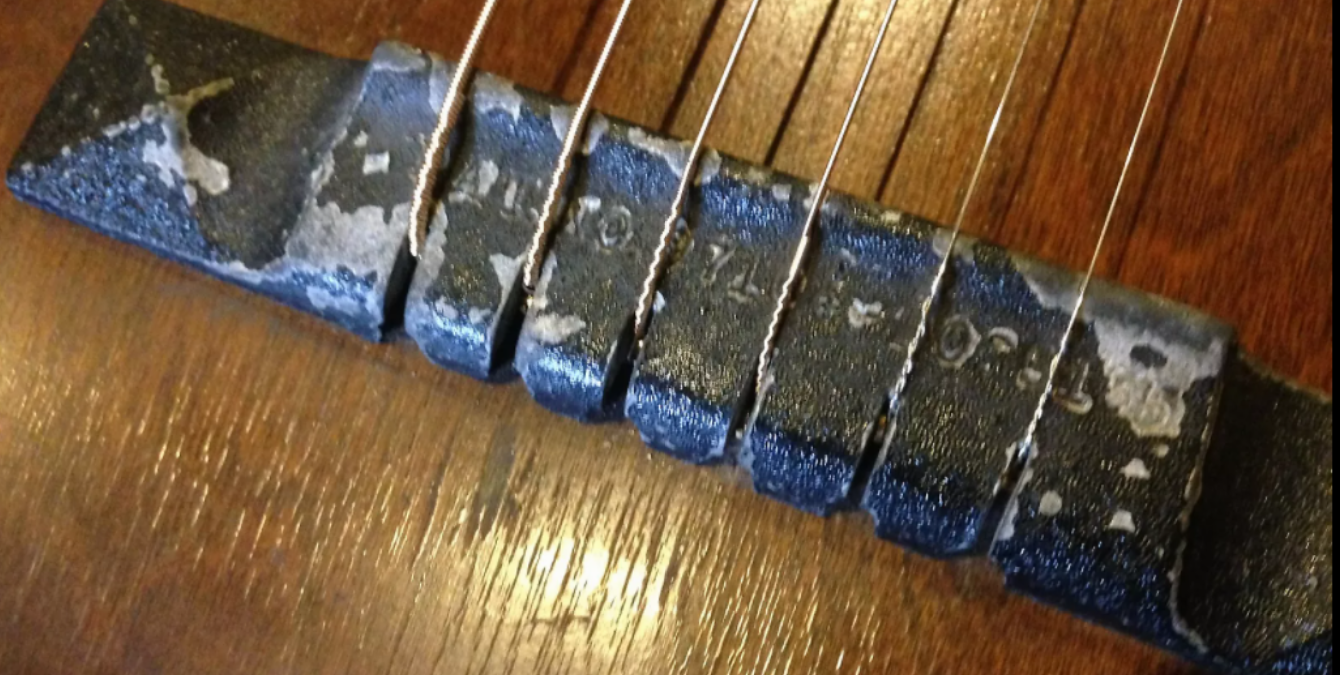 The black buttons of machine heads are the same. 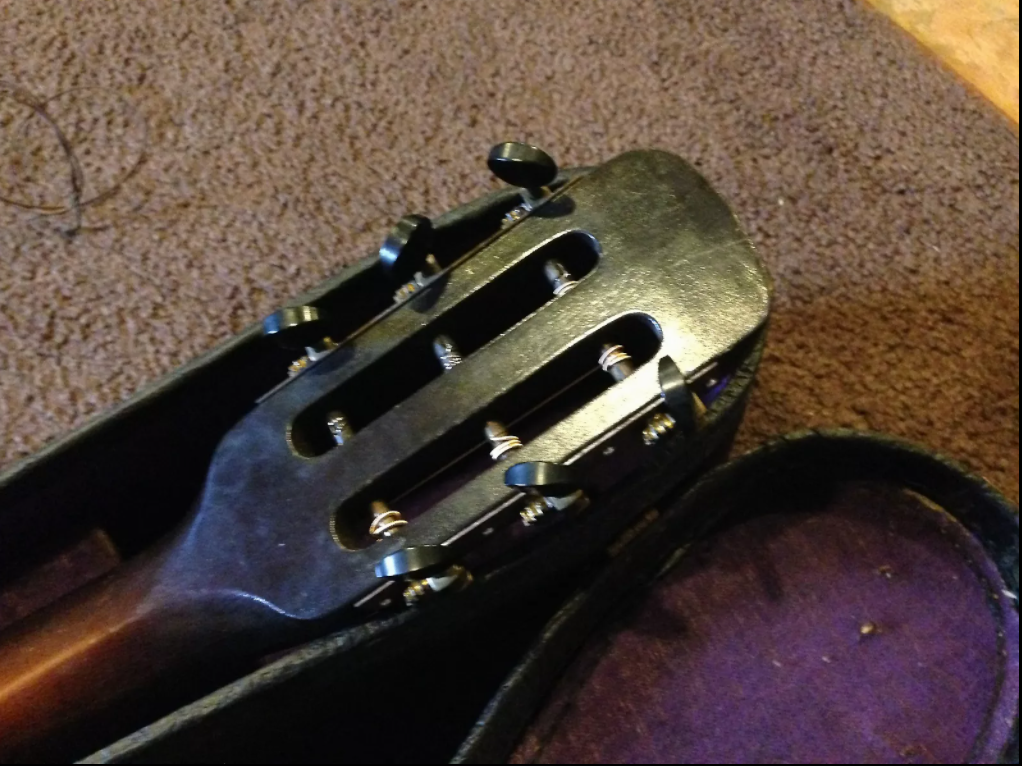 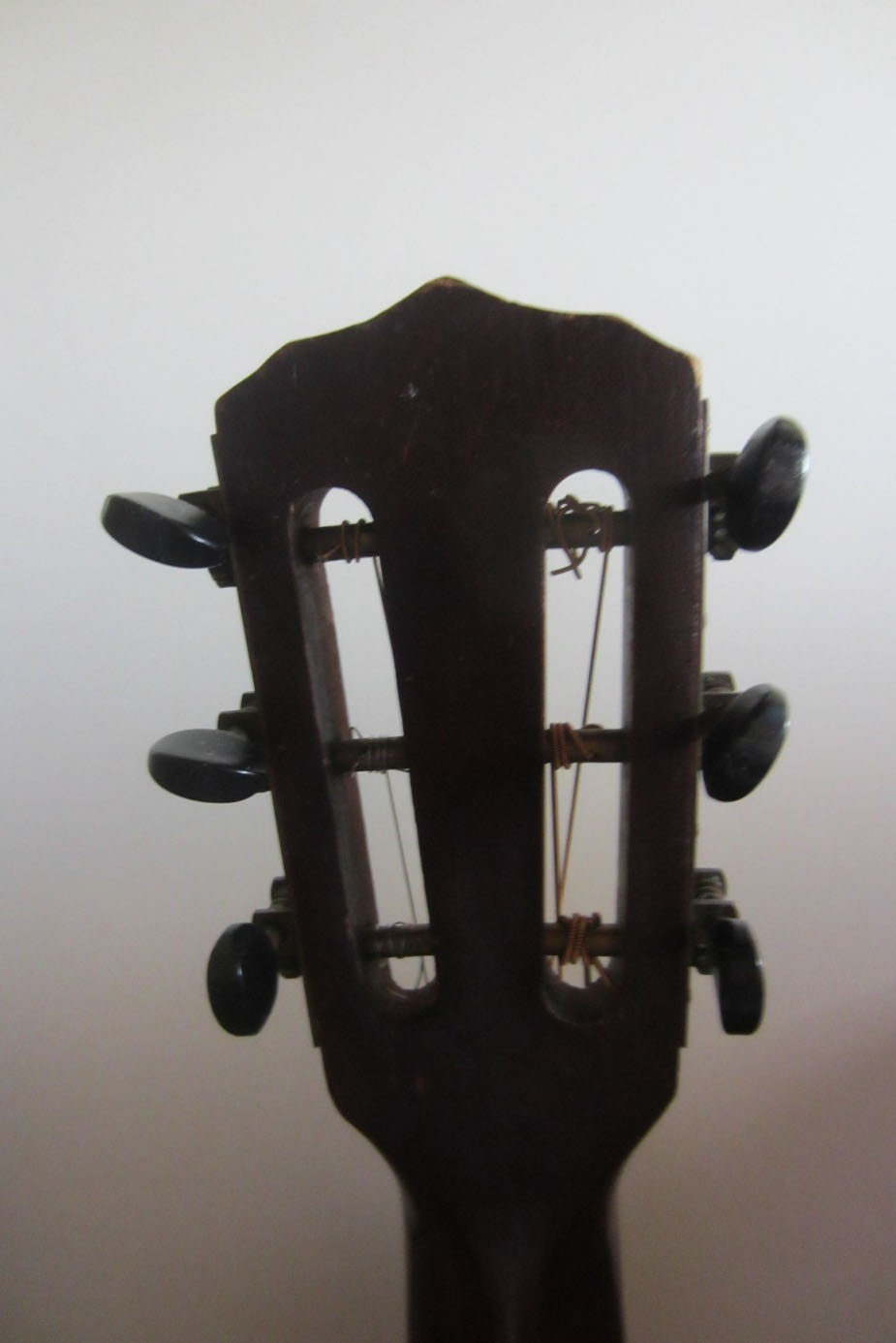 On several guitars of the 1930, the frets have been numbered by hand, to make the playing easier. 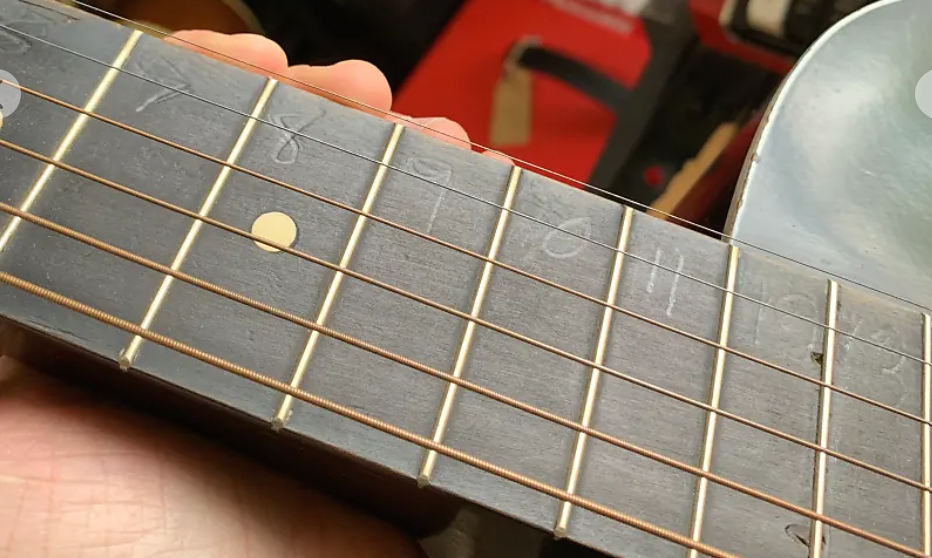 Frets numbered on the 1930s copy sold by Fanny’s House, which I thank for information.

Frets numbered on mine.

The guitar cases look very much the same with the 1920s copy, mine and others… 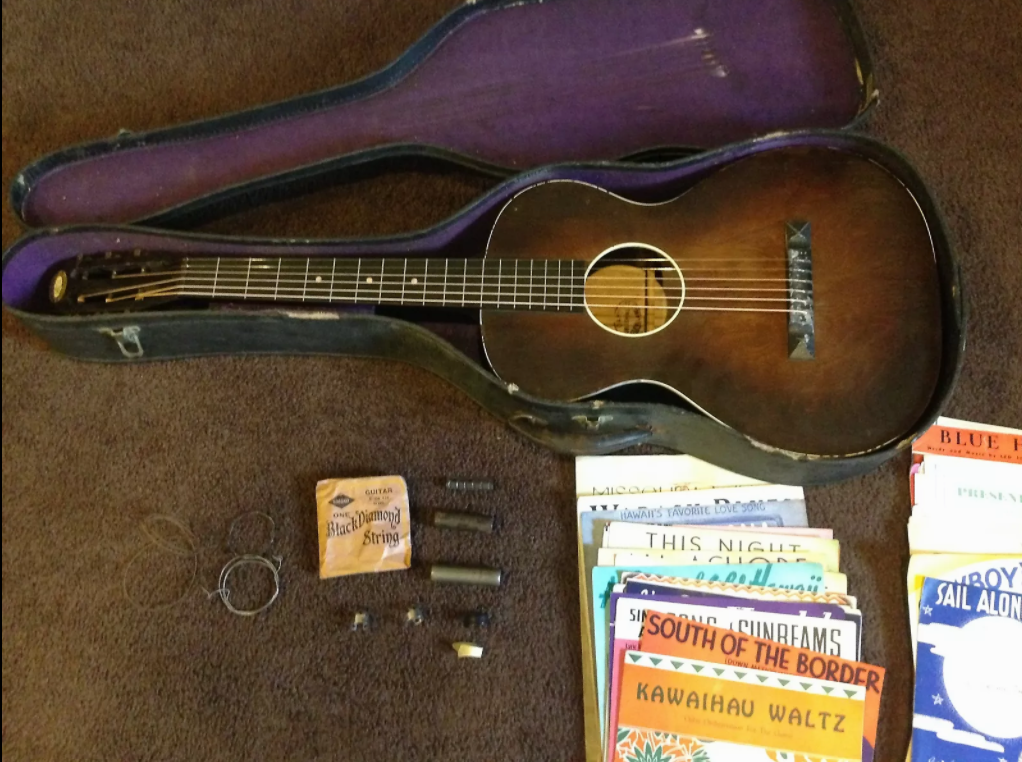 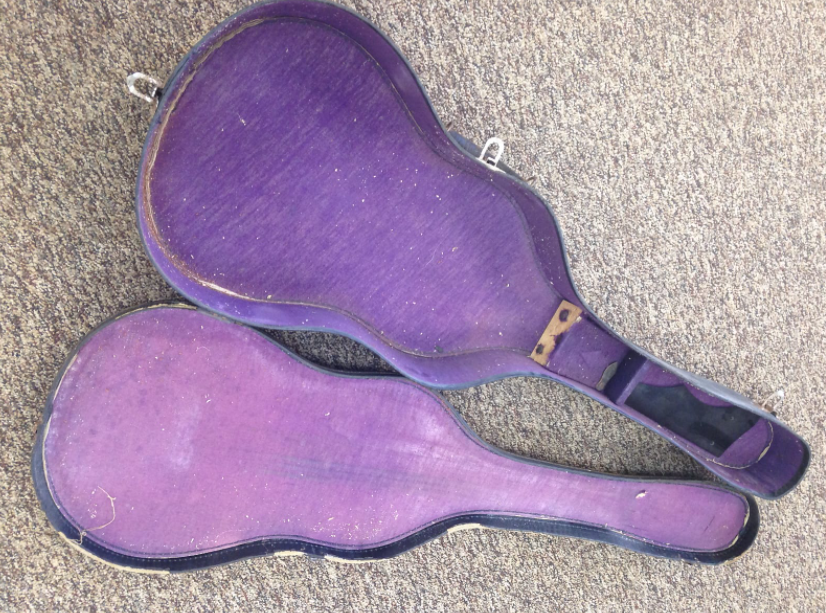 Case from the thirties with Oahu. 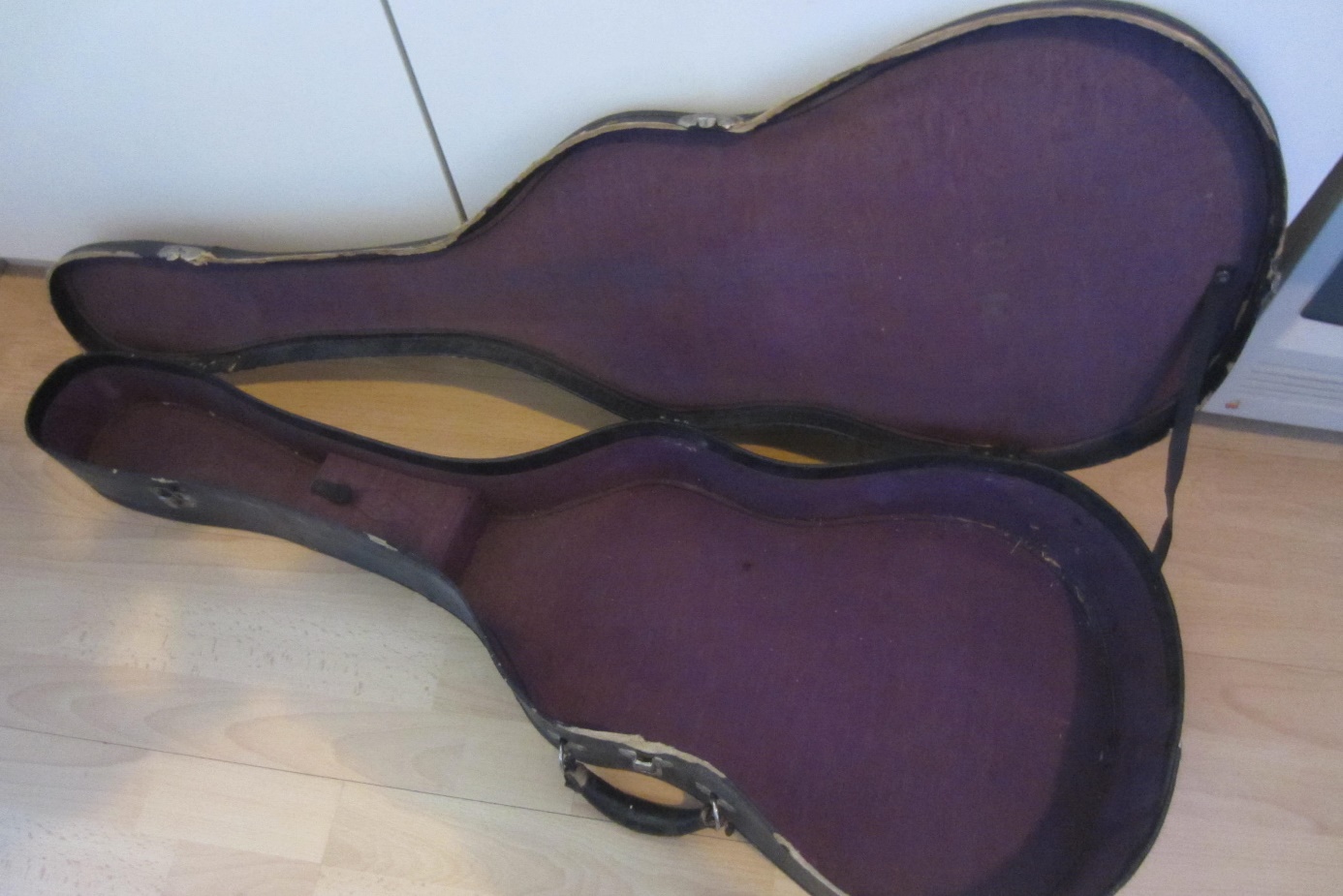 Unfortunately, I did not find in my case what accompanied the Oahu provided by Billy Rocks Store. The clever seller opportunely writes: “Comes with 2 solid metal vintage slides. These are highly collectable and sought after. There are also two metal finger picks. I do not know if these are vintage or not. There are 2 plastic thumb picks (again not sure if vintage).” The Manoloff slides from the thirties and fourties are also much sought by amateurs. 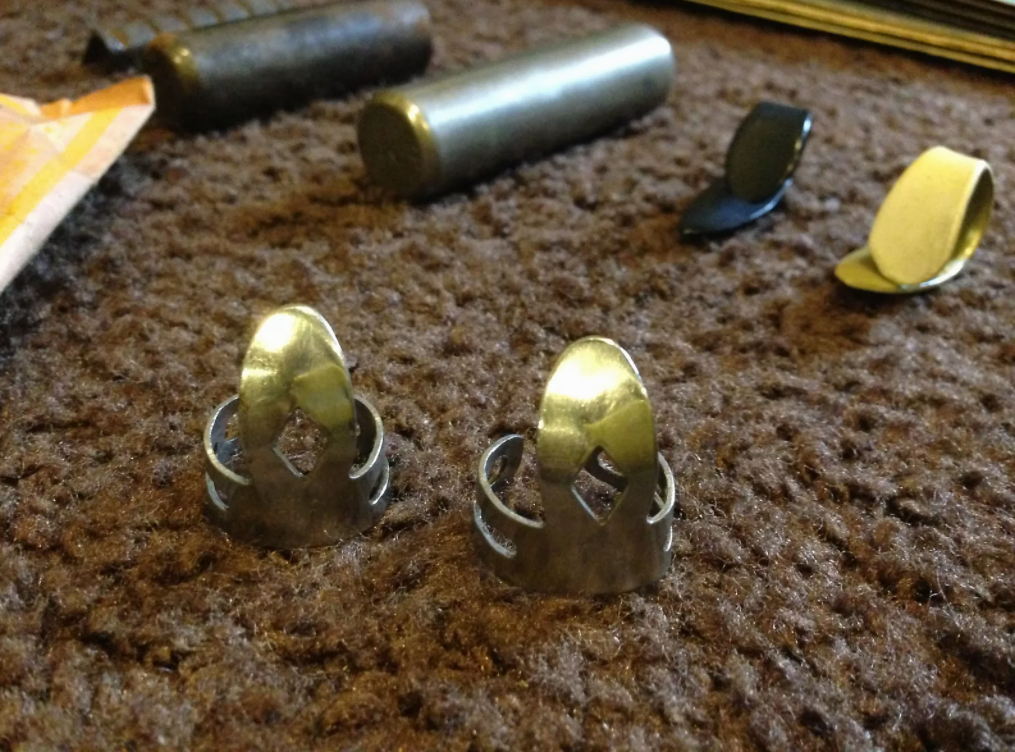