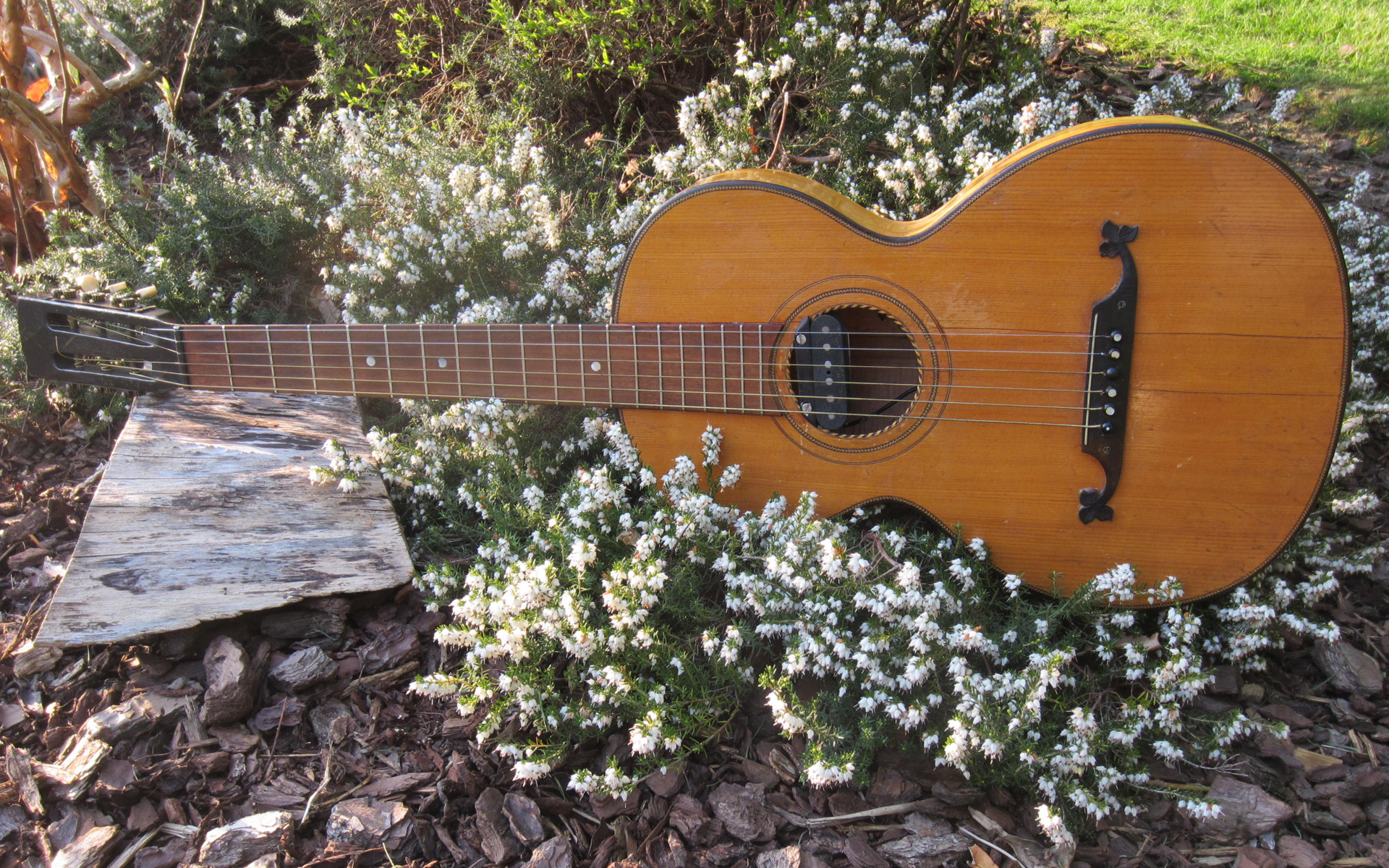 The top seems made of one massive piece of spruce and the sides and back are made in a nice flamed maple, horizontal stripes. The neck, perhaps in rosewood, has three mother of pearl dots: one at the octave and only two at the fifth and seventh frets – a feature seen in other old German parlours. Ill. 7. Another antique German parlour with a trifolia bridge.

Around soundhole, we find a binding of three circles in rather good shape. The bridge has trifolia designs that also decorated old “German” guitars. The latters should be considered concerning the tuners here with indented ends.

Christoph Hanusch, concert-artist (playing Bach, Giuliani, Sor, Villa-Lobos, etc.) who has a workshop for guitar (lectures, craftsmanship, research about old guitars, especially from 19th century) has kindly written to me that this instrument, in his opinion, “come surely from Schönbach, Bohemia”. This town of Czech Republik is also called Luby, in Karlovy Vary region, on the border of Germany. “There were a lot of guitar makers around this place, but very often they worked for the dealers from Markneukirchen and Klingenthal, that’s why often it will be mixed up.” Markneukirchen, in German Saxony, “only 5 km away”, in the Vogtland district, was well-known for its workshops of music instruments. “Anyway the style and construction of Vogtlandian and Bohemian guitars is pretty similar.”

Chr. Hanusch adds: “I think your guitar was made around 1920/30; it was a rather cheap instrument – some kind of ‘Wandergitarre’ [tramp-guitare] – like the most guitars at that time. Nevertheless it was handcrafted by a routined guitar maker or in a workshop where some people worked together. It is – and will be forever – impossible to say who it really made : in Schönbach worked generations and dozens of craftsmen, making their living by making guitars and the same like it was in Markneukirchen.”

A Shadow Nanoflex Pickup has been fixed in the soundhole by my wife Alice, my son Gilles and his daughter Nora. Not so easily.