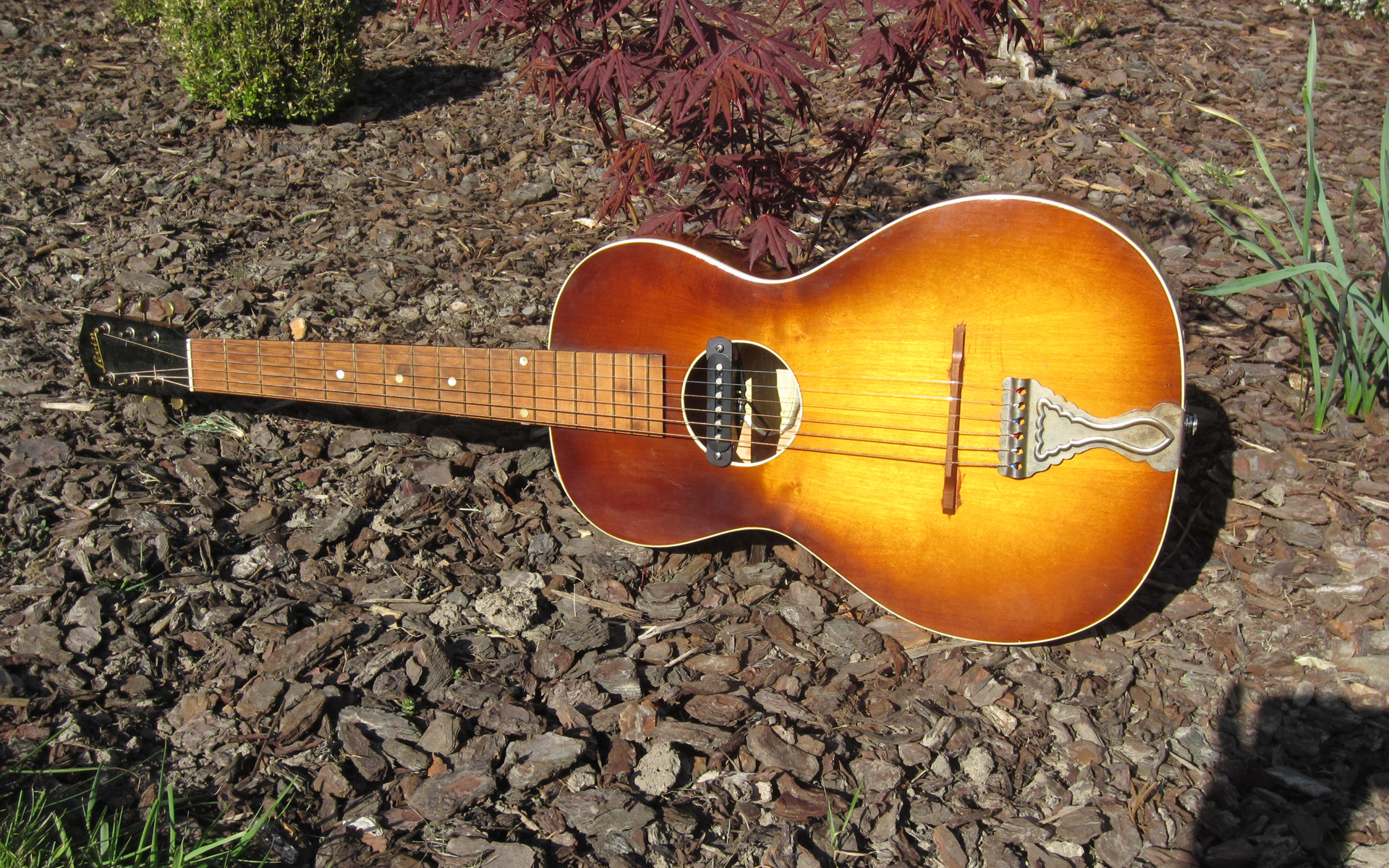 I bought this very cool parlour guitar through the famous Reverb site to Archtop Heroes, “private seller enthusiast in London with large collection of European and US archtops”, who also proposes other nice Levin and Kay guitars perfect for old blues (see for example).

This guitar is a Model 60, catalogued on the Vintage Guitars / Stockholm Sweden site in the category of “Levin non f-hole floating bridge guitar”. The Model 60 was introduced around 1937 (the earliest known example being of 1938, number 108525) and produced until around 1947 (the latest known example being of 1945, number 162355). My instrument has the number 156727, which indicates that it could have been manufactured in the middle of 1945 – time of my conception… – according to the Levin Serial Numbers of Vintage Guitars. From 1900 to around 1970, the instruments had 1 to 6 digits impressed into the top edge of the headstock. The Levin information pages provide several photos of 1938 known examples, but only one for a 1943-1945 example.

We see by this 1943 copy that the Model 60 had at that time a tailpiece with a sort of embossed cord, different from the one shown in the older copies, that was flat and more simple, in the “vase” or “amphora” shape. The tailpiece of my guitar is the same. The Levin information pages indicate that the company “changed tailpiece design” of the M 60 at least two times, at unknown dates, between 1937 and 1945. I have found on the Swedish site Auctionet a M 60 with number 154647 – thus a 1945 copy in principle older than mine – which has the same “embossed cord tailpiece”.

This auctioned copy, however, has not the same keys as the 154647 and 156727 numbered copies of 1943 and 1945 : here in «tulp plastic», when the two others (and mine) have metal keys, looking like the Vintage Grover 138 Series or the Deluxe Guitar Machines 133 Series (illustration). It is strange that an after-war guitar had sort of plastic keys – the Vintage Grover Sta-Tite (97 Series) type (illustration) – when a later copy (mine) had still metal ones like in an older copy. The keys, not original, could have been changed (?). Christian Séguret wisely concludes, and it is even more understandable when you look at the image above, with this thin trunk: “It would remain to détermine, and only the experts could do it, if the essences likely to be used in constructing guitars, could have grow in quantity in those areas. Finally, one thing is important: the tops of those guitars are in all respects remarkable: nice vein, thin and regular, evident acoustic quality, worked with the traditional delicacy of the stringed-instrument makers of the old continent.” The birch of the back and sides of the Model 60 also deserves a notice in Christian Séguret’s first article about “Levin. Les modèles suédois. Partie 1” (Vintage guitare 25, oct.-déc. 2016, p. 28-41, here p. 40). “The Masur Birch is an essence that appears often in the catalogues and on the photos of Levin guitars. It is characterized by a remarkable curly pattern of veins, very spectacular as early as cut, and that reveals an amazing complexity when its is enhanced. It is in fact a variety of birch typical of the Northern countries, that develops designs analogous to the ones that maple can do in the famous ‘flamed maple’, or curly or birdseye mapled well-known by connoisseurs” (I have myself sold with regret a Les Paul with such a maple on top…). Séguret calls this “a genetic anomaly transmitted from tree to tree since many generations, according to some sources”– “such an esthetic damage”! But the latter could be caused “by a local scarab”, according to other sources. The Wood Database is also in doubt on the question. “Masur Birch is not a particular species of birch, but rather a grain figure that is most commonly seen in Downy Birch and Silver Birch. It is also sometimes known as Karelian Birch – withe Karelia being a region between Finland and Russia.” In Russia, a knife with that type of wood is called oprichnik, “very hard and durable because the knots are in the wood”, according to Dean Seaman (on Wood Database, 2015). If the influence of the boring larvae of a certain beetle is strongly discussed on the mentioned site, we remember that “Masur Birch in Norway has been shown to be hereditary, classifying the name of the variant as Betula pendula var. Carelica” (betula is the Celtic-Latin origin of the French bouleau, the Breton bezv, the Welsh bedw, etc.). For the Wood Database, “the resulting figure and appearance of the peculiar grain pattern is very similar to burl wood or birdseye maple, though of a different origin”.

After such a debate, it is time for some images of the wood, taken from different sources. What could be added concerning the Levin Model 60? The Archtop Heroes announcement says : «Walnut fretboard with mop inlays. Rosewood bridge which has been glued on with hide blue and can be removed and lowered down to desired height if needed. Sunburst. Body width 31.5 cm. Straight neck. All original.» A pickup has been added in the rosette by Jérôme Nahon.

For a comparison: Levin Model 65, Made in Sweden 1942 – Acoustic Guitar Demo.