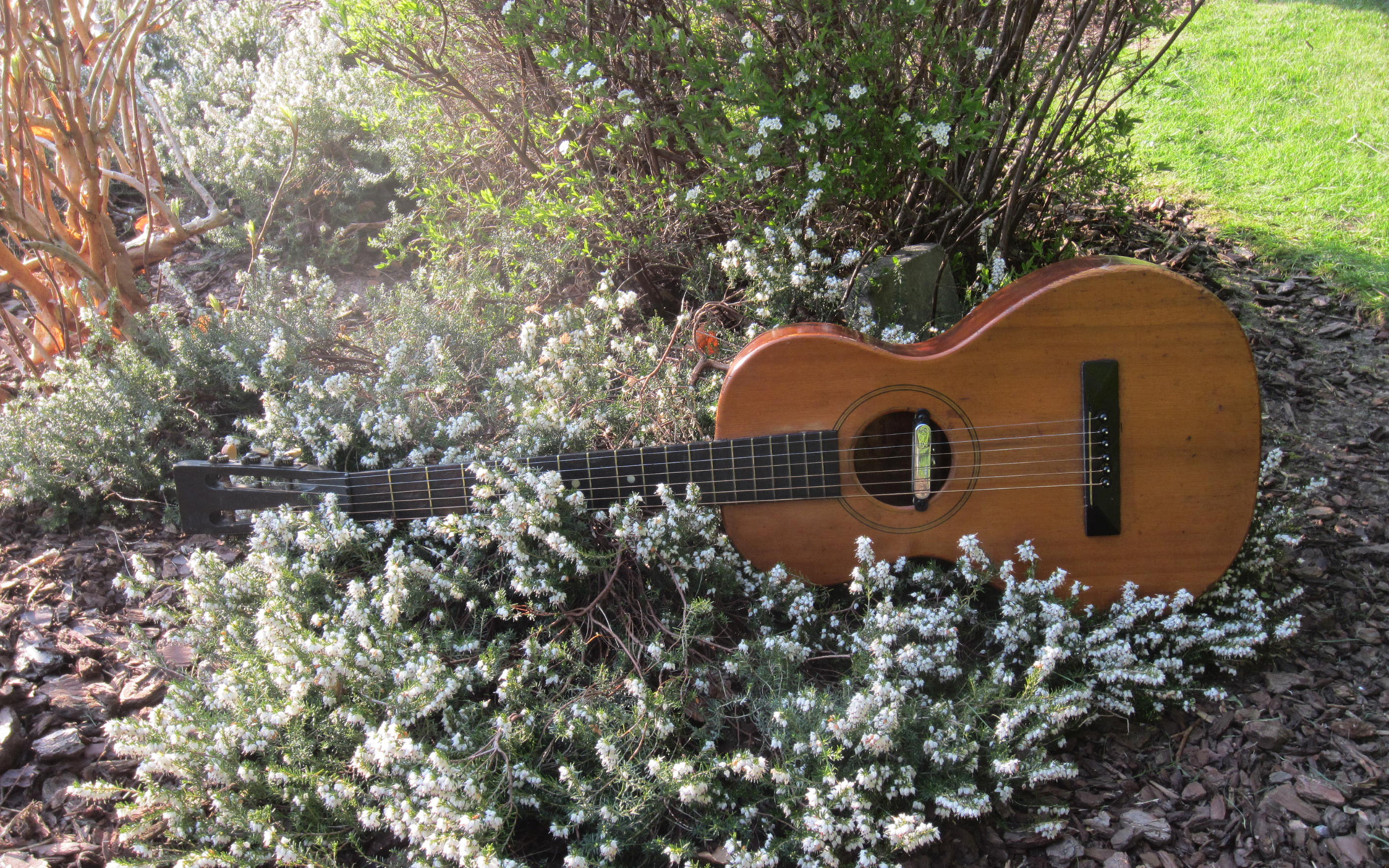 This parlour guitar (ill. 1-4) has inside the inscription, engraved with a red iron: “Musikinstrument Fabrik Nåssjo“ (ill. 5). It is the same inscription that we read in a copy currently undergoing restoration in Asgaut Steinnes’ collection (ill. 6), who holds the very interesting site NorskeGitarer. Nässjö is the name of a Swedish town located between Göteborg (about 190 km) and Stockholm (320 km). A. Steinnes, to whom I am grateful for sending me the photos of his Nässjö guitar (ill. 6-7), also communicates an article (in Swedish) that documents the beginning history of the factory producing those instruments : Arwid Wallerström, Nassjö Trade and Industry in Words and Images (Nässjö handel och industri i ord och bild), 1916, p. 159-161 (the same author had published in his newspaper Nässjö Nyheter, in 1914, a first presentation of the enterprise). We read that the factory was founded in Nässjö by the manufacturers Alfred Anderssson and C. W Johansson who previously performed musical instruments in Tranäs, about five hundred kilom. from Nässjö (ill. 8). The factory, that we see here (ill. 9), involved on the second and third floors a room of the machines, a room for painting, the offices, etc. We also discover the « room for mounting » guitars, with the soundboards hanging in line (ill. 10), and the “room of completion” (ill. 11) where could probably be applied the varnish and perhaps the coating supposed to give to the sides and the back the appearance of rosewood (see below). We can count in the first room a dozen of persons and a small number in the second, which gives an idea of the number of employees – “around twenty” – working at the factory in 1916, the latters being under the direction of the supervisor Hjalmar Johnsson (ill. 12). A photo of the staff shows indeed 21 persons, among whom several women, one child or very young man… and a guy holding what seems to be a mandoline (ill. 13). Ill. 12. – Hjalmar Johnsson, supervisor of the Nässjö staff (from A. Wallerström’s book). Ill. 13. – Group photo of the employees (from Wallerström’s book).

The chronicle also states that “the instruments are sold not only in Sweden but also to a large extent in Norway”. With a “preliminary capital of 30 000 Swedish kronas” and a turnover that amounts twice as much, the factory may confidently consider to “amplify the movement”, despite the war. A. Steinnes adds: “I have not been able to find out how many years the factory existed.”

It has been written that this factory tried to compete with the famous Swedish company founded by Herman Carlson Levin – the Levin Company – that produced over half a million of instruments (guitars, mandolines, banjoes, etc.) between 1900 and 1978. Chr. Séguret has undertaken to write in a very learned way its story in the French magazine Vintage Guitare (# 25 and 26, oct.-dec. 2016 et jan.-march 2017). The Swedish site Vintage Guitars includes some “Levin Informations Pages” allowing notably to identify the instruments produced since the beginning of the 19th century by model number/name.

The Nässjö parlour that we show here has on the head, as it is usual, a number that may be read “47538” (ill. 14). It has been said that the company imitated the Levin way of numbering. To refer to this numbering with a Nässjö is questionable, but we may try it. The site Vintage Guitars provides a list of the “Levin serial numbers” where the numbering, from 1900 to around 1970, would extend from 1 to 6 digits. “47538” takes place in the series “45997-48663”, which refers to guitars of 1920. The indication must be taken as a pure speculation, especially because, in the case of the instrument held by A. Steinnes, the figures (ill. 15) would refer, according to the Levin numbering, to a guitar of 1905, something that is contradicted by the information concerning the beginning of the production in 1916. Other specialists could perhaps enlighten this matter of date.

Chr. Séguret writes in one of the articles quoted above, concerning the most ancient models of Levin, to which could be compared the Nässjö that are known (# 25, p. 31): “Those guitars have generally the small size of small Parlours, with a width of a dozen of inches, constructed with bars in ladder. They were rather close to each others in terms of conception and construction, but they have in common that they show an aesthetic profile of Lutherian rigor, plain and Spartan, with some ornamental frivolities giving a touch of lightness to a landscape moreover uniformly brown and cheerful like a winter over the plains of Jütland (near to the neighbour Kierkegaard…)”

The guitar shown here has indeed a “dozen of inches” of width on the lower part and 22 on the higher. The fretboard, of 12, is 42 cm. long. Séguret writes that Levin favoured “the local essences” so that we can find “without any surprise spruce and birch among the woods employed in the guitars of this time, the last essence being particularly esablished in the Northern forests of Norrland, even if this wood is sometimes tinged in order to simulate rosewood”. He provides an example – “a Model 5 of 1914” – that allows to appreciate to which extent the Nässjö looks like a Levin (ill. 16-17). Ill. 17. – Nässjö. See the analogy of the circle around the sounddhole.

My guitar has been bought to Jonas Østrup (Denmark), who cordially informs me of his acquisitions, through the well-known Reverb internet site. The pickup – a Fender Telecaster one – has been mounted by Jerôme Nahon.