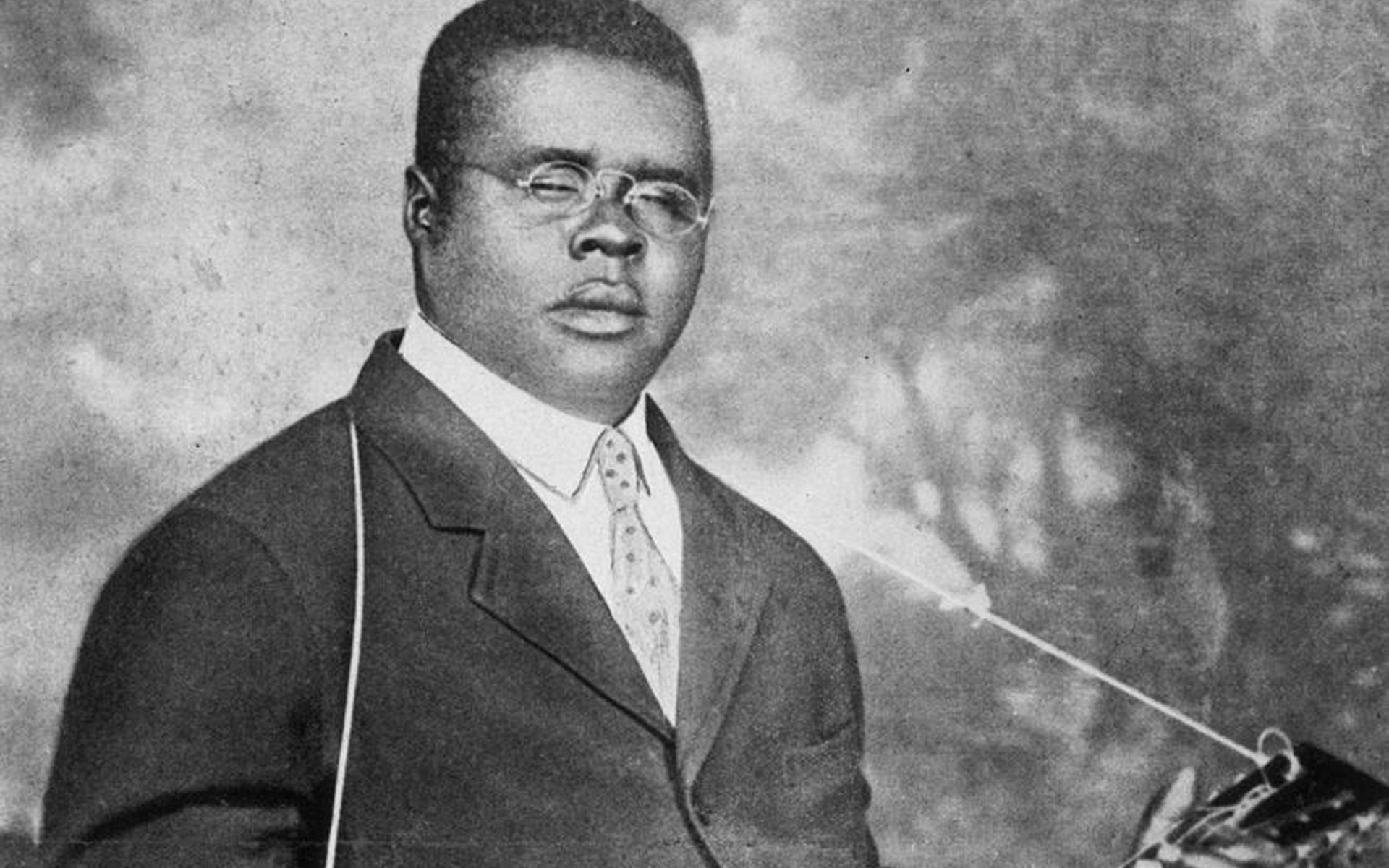 It has been said that Jack O’ Diamonds is a Texas gambling song dealing with “losing money at the conquian”, also called coon can, “a rummy-style game” or “a proto-gin rummy” which was supposed to require very close attention and a good memory from two players (Wikipedia). Each player may be dealt 9 cards and attempt to meld 10. The Jacks, Queens and Kings may be removed instead of 8s, 9s and 10s. The cards are divided in four suits: the Spades (known as power), the Clubs (as spirituality), the Hearts (as love) and… the Diamonds (as materiality). The Jack in Diamonds is ‘a hard card to play’. But if you can bet it against the Queen, it’s going to “turn your money green”, that is to say: it’s going to make your rich. Tom Rush – I saw him playing long time ago with Roland van Campenhout at the Lokerse Feesten – was singing: “I told her stick with me baby and I’ll turn you money green (bis) / I’m gonna give you more money baby Rockefeller even seen”. If you use the Jack against/again/agin the 4s – the transcriptions are different – “you win right in the dough”, that is to say “in the paste”, literally, or “in the money”. 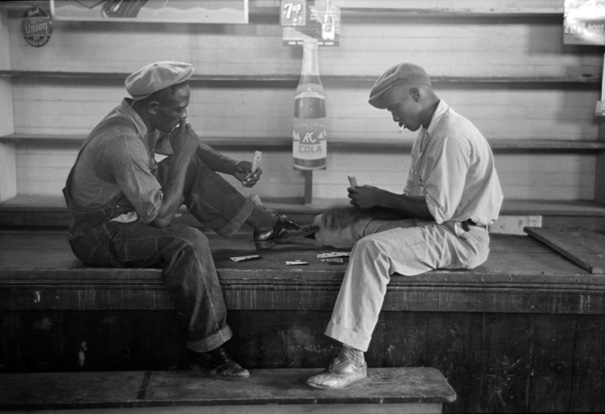 Game of coon-can in store near Reserve, Louisiana. Photo by Russell Lee (1903-1986) for Farm Security Administration (1938). Via Library of Congress website; converted from tif to jpg, contrast adjusted and border cropped before upload to Wikimedia Commons.

Blind Lemon recorded the song two times, seemingly at the same session, around May 1926, and it was also printed on Paramount number 12373A-B of the catalogue. It is supposed to be the only song played in open G turning recorded by the artist. 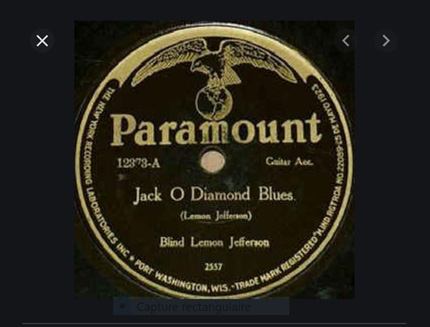 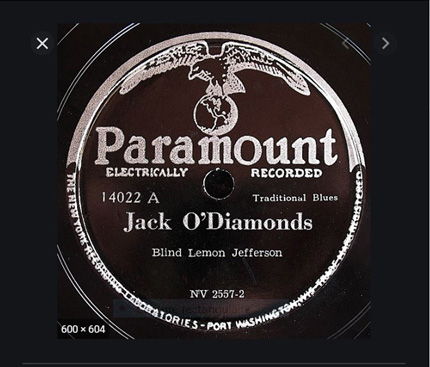 The structures of the two songs seem very similar, but they are different if we consider that three parts are combined and repeated: (a) the “appeal” part or chorus with the same singing Jack O’ Diamond…; (b) the stanza or couplet or verse with a different text (Jack O’ Diamonds once in  time / Bet the Jack against the Queen / Bet the Jack against/again/agin the Four/ Jack O’ Diamonds made my cry; (c) an instrumental part corresponding to the singing of the stanza.  Let us put it in a table. 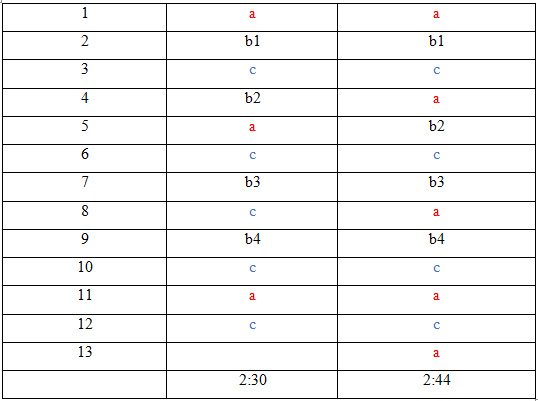 It appears that, instead of singing the chorus with ‘Jack O’Diamond’ three times one take – the shorter – he sang it four times in the longer but kept all the stanzas and even achieved to put the b3 and b4 at the same place. But the number of the instrumental part was reduced in the shorter take. What could it mean? That he was wrong in one of these takes? Blues players of the time performed so frequently than they generally, like Robert Johnson, repeat rather closely the same song in the same formula. Did Blind Lemon prefer to place the accent on the chorus, which was a more “appealing” shout or cry, supposed to announce the “dying” rhyme of the end? Was he not so satisfied with the instrumental part? I hear that some notes seem to be lacking in the c before b4. He asked perhaps for another take, which had not any defects, from this point of view, but which seems less “moody” – something usual when an artist try another take. First essay always the best? 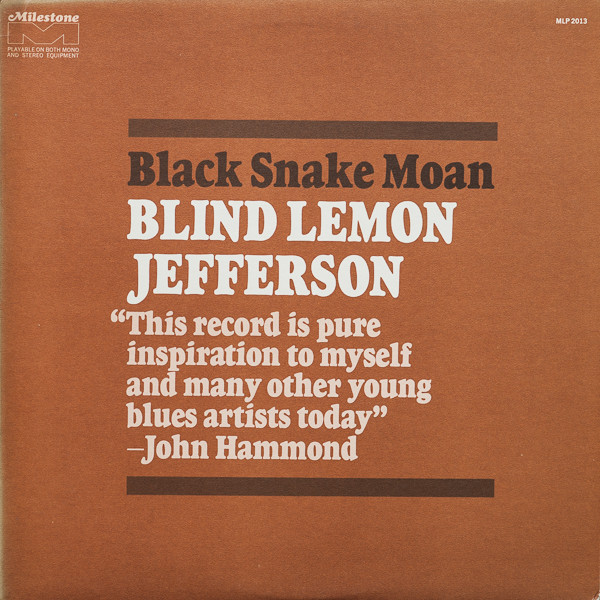 The cause of Blind Lemon’s death in unknown, even if a heart attack during a snow-storm is often invoked. It is possible that his body, as it is advanced by Bruce Eder, was accompanied by William Ezell, by train for burial in Dallas. “He was a busy figure at Paramount, not only cutting a significant number of sides of his own, but also serving as the pianist-in-residence for a large number of other artists, and a general handyman and go-fer”. Ezell was born in Brenham, Texas, around 200 km. from Wortham, where was buried Blind Lemon. Born in 1892, he was older than the latter, born c. 1897. He was with Blind Lemon on a promotional 78 produced in 1930 by Paramount including Blind Blake, Charlie Spand, the Hokum Boys and Papa Charlie Jackson

If you find a copy, please remember it is estimated 617 dollars = around 550 euros. And tell me when we hear Blind Lemon on it. 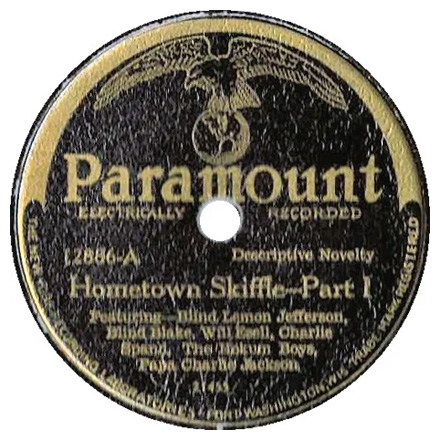