A Levin Banjolin or mandolin banjo of 1929 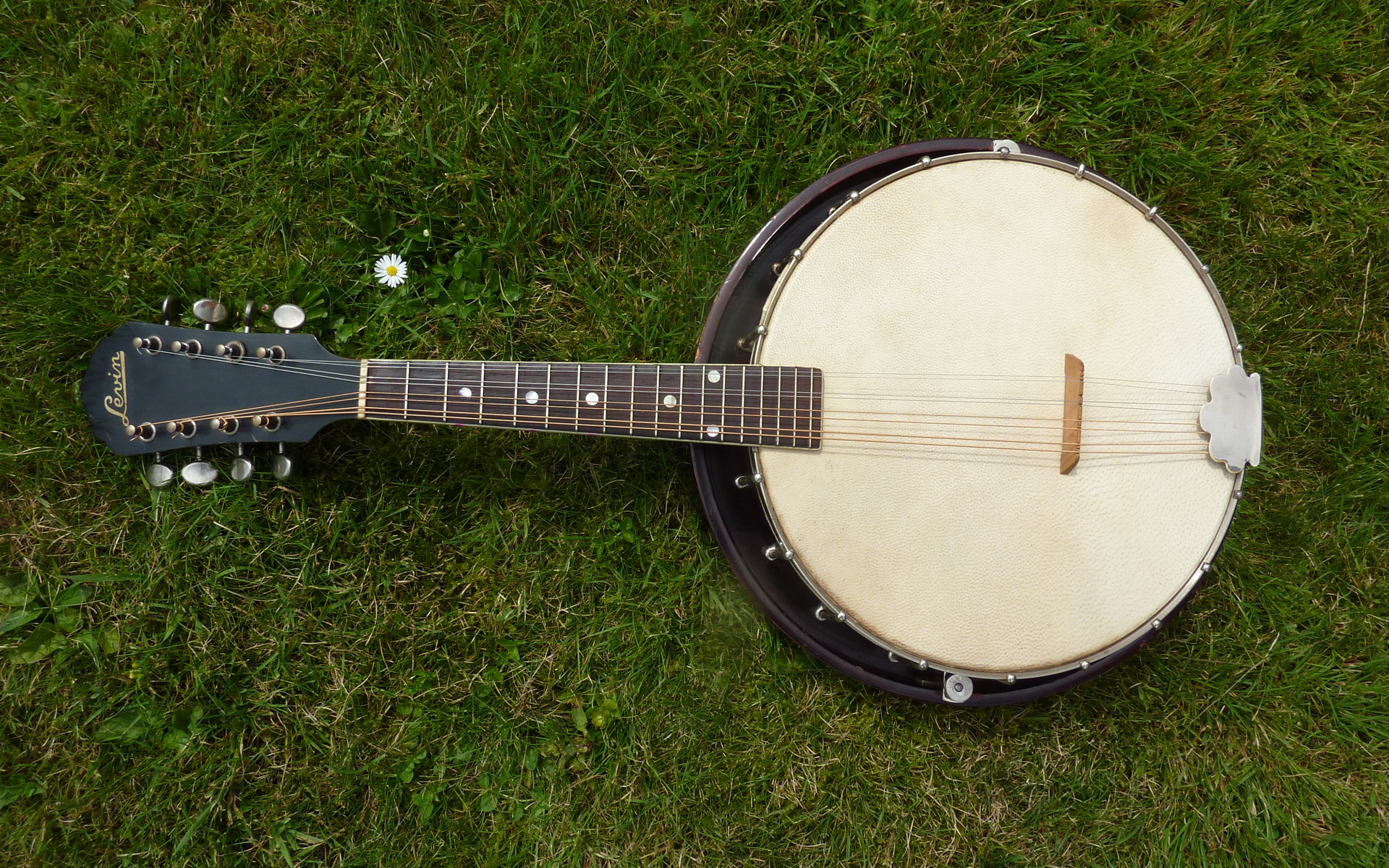 This is a banjolin, in French banjoline, or mandolin banjo or banjo mandolin, a hybrid instrument mixing banjo and mandolin. It has been invented at the end of the 19th century and the first patent has been applied by Benjamen Bradbury of Brooklyn in 1882. The name banjolin has been applied in 1885. It has the body of a banjo, here called the resonator: a wooden body with a metallic circle on which a skin is tight. The neck is much shorter than a banjo’s one. It has 8 strings in 4 couples like a mandolin and they are tuned like a mandolin or a violin: G-D-A-E. The instrument was made in Göteborg, Sweden, by the famous Levin factory. I bought it in June 2021 from Prinz Guitars Amsterdam (https://www.prinzguitars.nl/), which keeps the memory of a shop of musical instruments since 1842.

1. Identifying and dating the instrument

This a model M 100 according to the Levin Information Pages on internet. The commercial announcement of Prinz Guitars dated it from 1929. The “Levin serial numbers” of Levin Information Pages indicate that, from 1900 to c. 1970, the Levin instruments have a number of one to six digits printed or engraved into the top edge of the headstock. This instrument has the number 71637 (picture 2). The series from 68225 to 71939 indicates indeed that it was made in 1929. 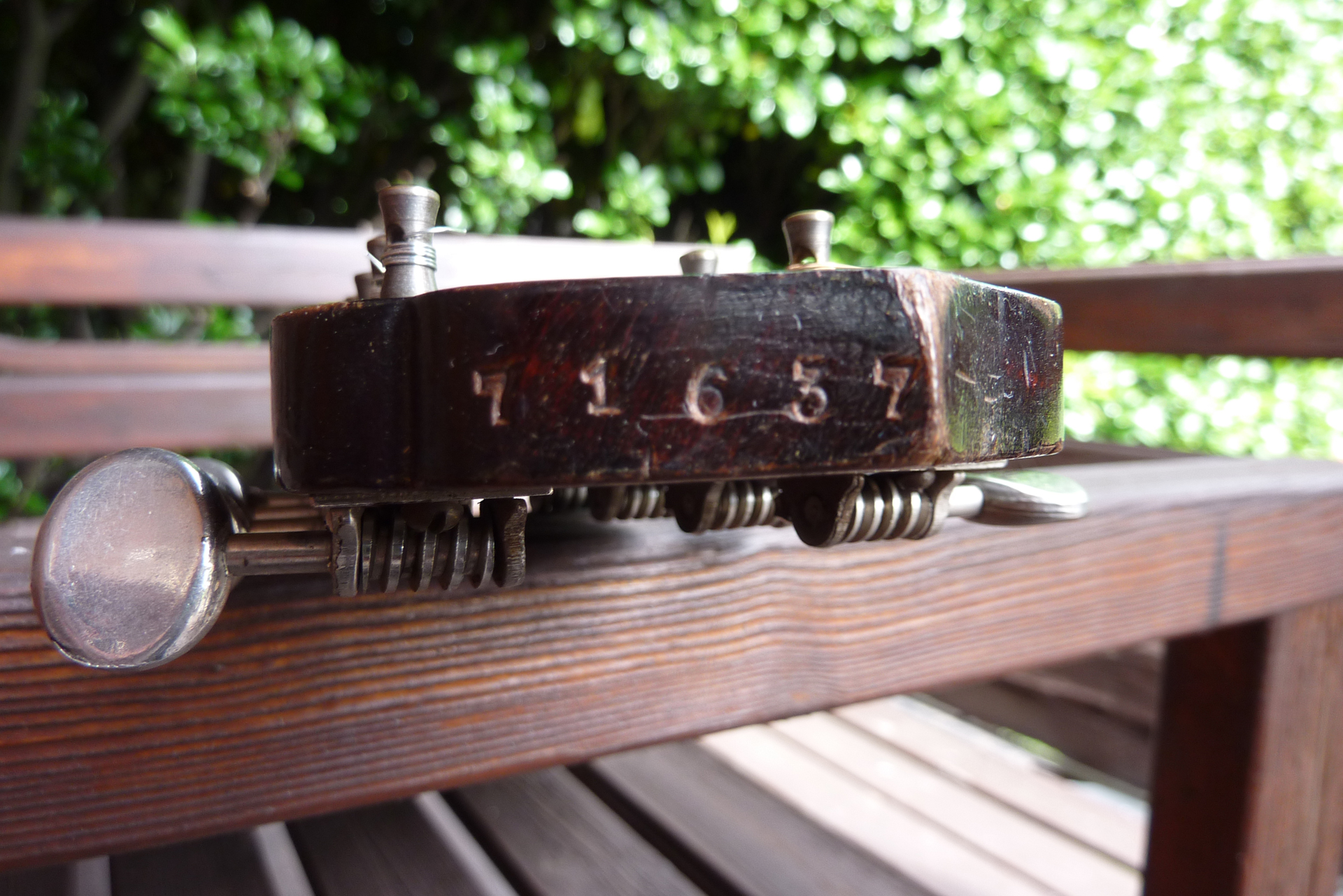 The section “Banjo mandolins” of the Levin Information Pages does not mention any banjo mandolin after c. 1923 (http://www.vintage-guitars.se/Levin/Levin_mandolins.php#Banjo). But the Pages mention a “mandoline banjo” M 100 introduced c. 1926, produced in 1929 with a one-year warranty and at least from c. to at least  1947 (http://www.vintage-guitars.se/Levin/Levin_M_100_Banjo_info.php). We may suppose that the references to the “banjo mandoline” and the “mandolin banjo” have not crossed. 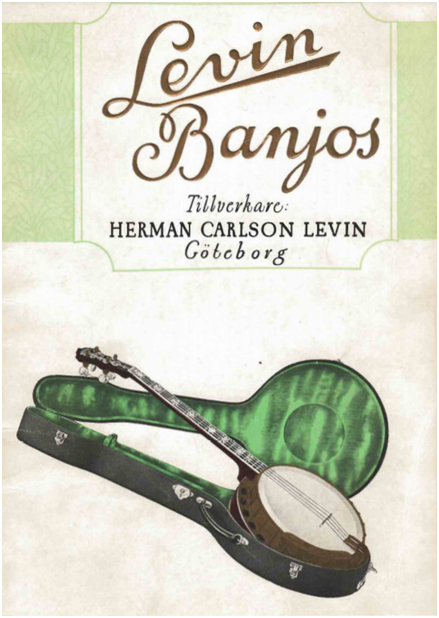 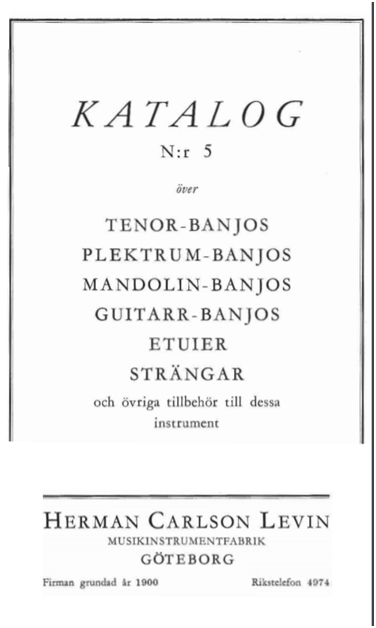 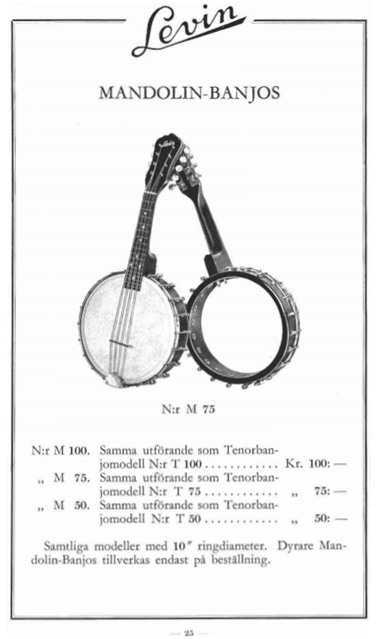 The model M 100 has “the same conception as the model Tenorbanjo nr T 100”. It means that the tone ring (ringdiameter) has the same diameter of 10 inches, that is to say around 25 cm., which is verified by measuring the instrument at the skin without any wooden back.

Something which could seem strange is the fact that the picture in the catalog shows the instrument without any wooden back. Some banjolins were built this way. But which is depicted here is the model M 75, more litlle than the M 100 and which costs less. The “Standard Tenor Banjo” depicted in the same catalog has a wooden back without ornamentation or embellishment, like my M 100. 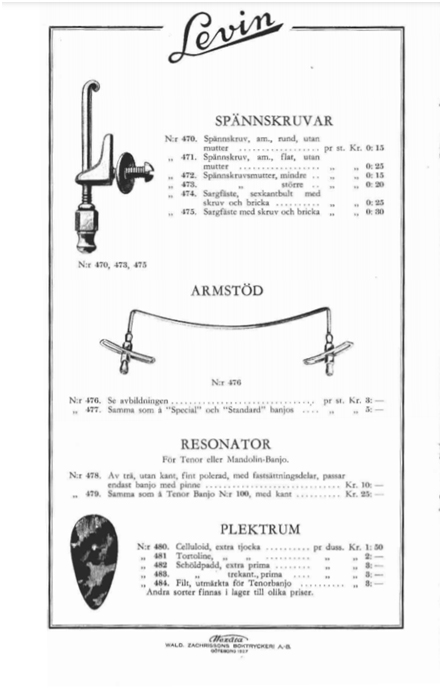 The resonator or wooden body “for Tenor and every Mandolin-Banjo” (picture 6). The resonator is “in wood, without binding, finely polished, with fixation pieces” (n° 478). It is specified that “it is only suitable for a banjo with stick/rod”. 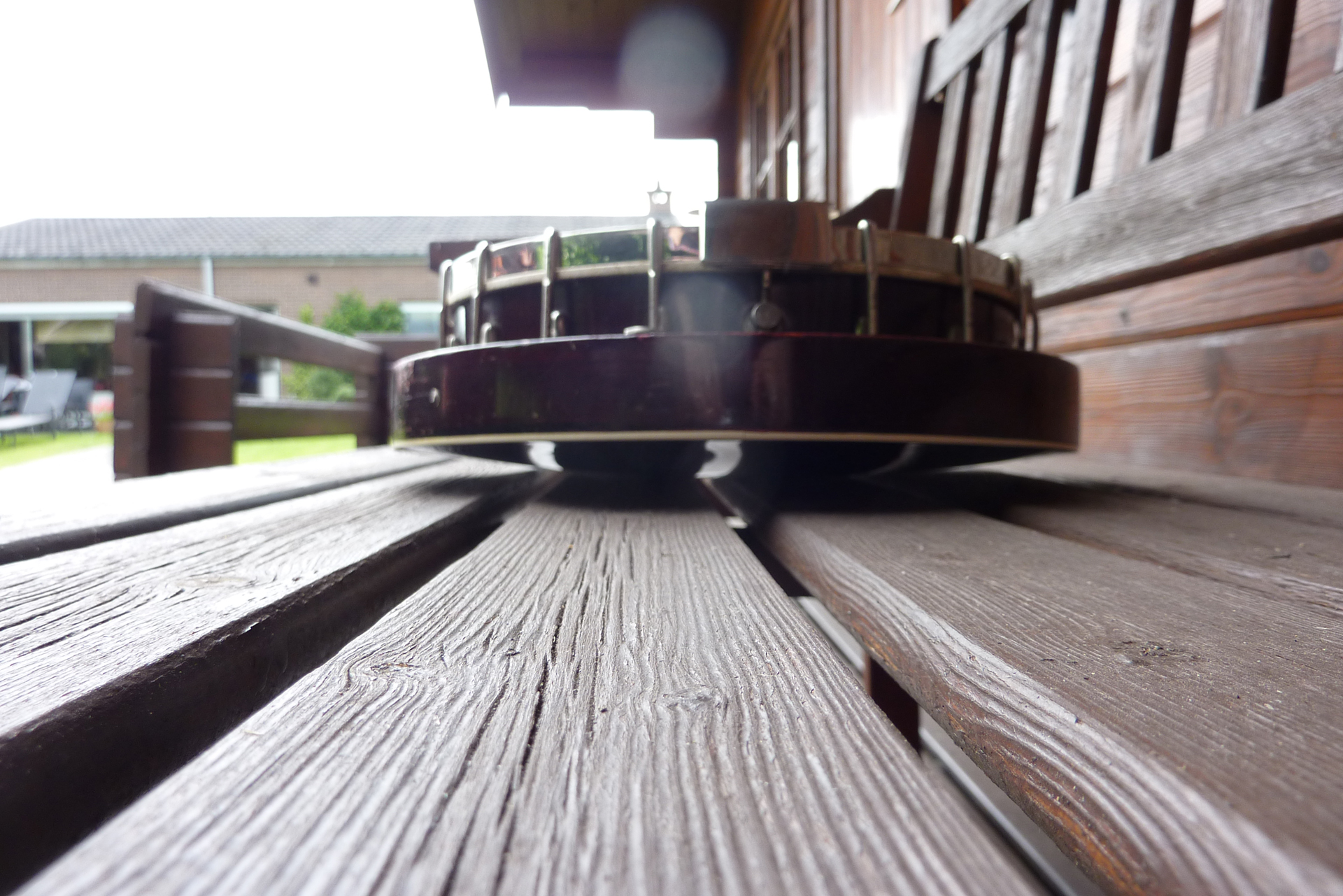 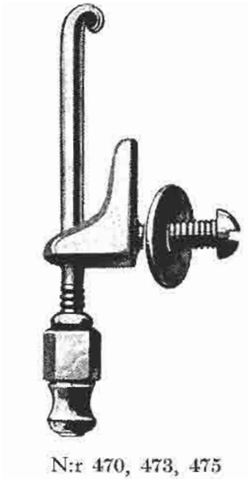 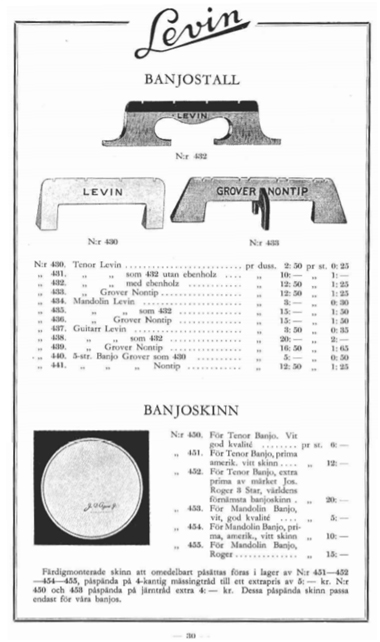 The 1927 catalog shows a Levin banjostall “bridge” in various forms. Our bridge (fr. chevalet) is here rather different (pictures 8-9). 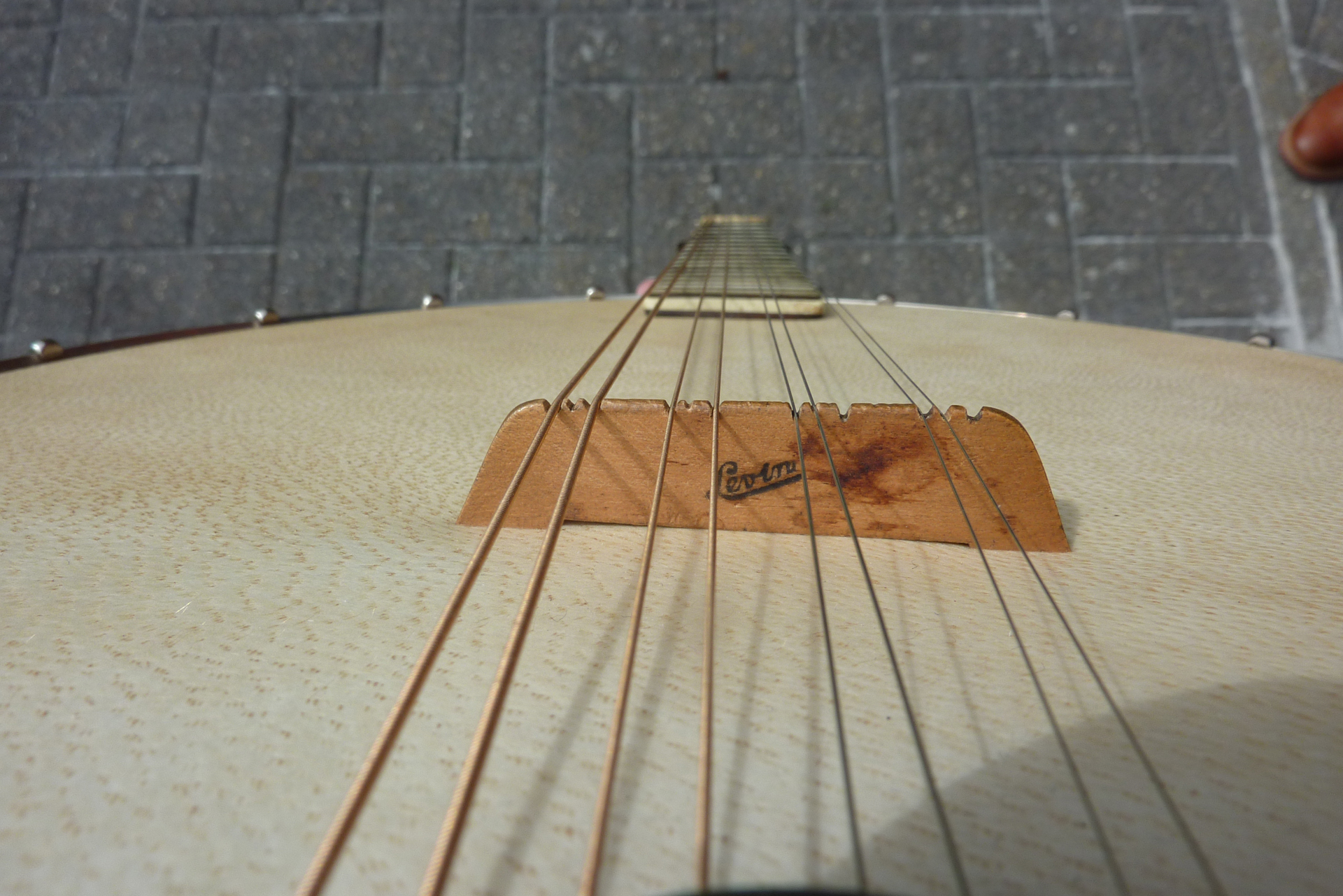 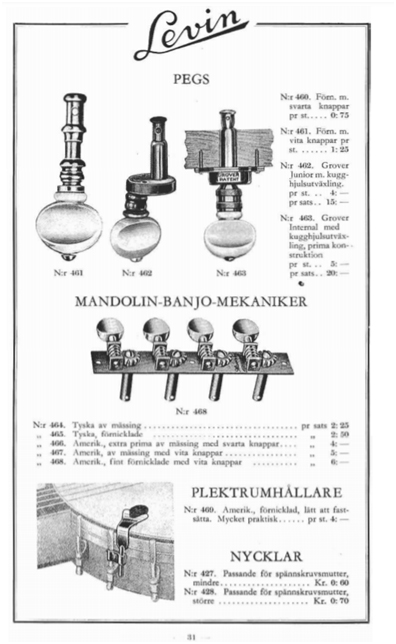 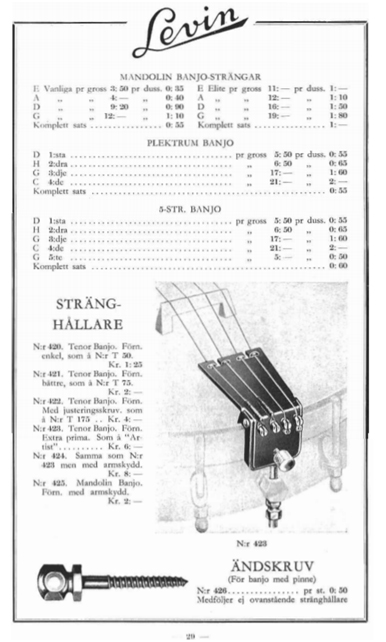 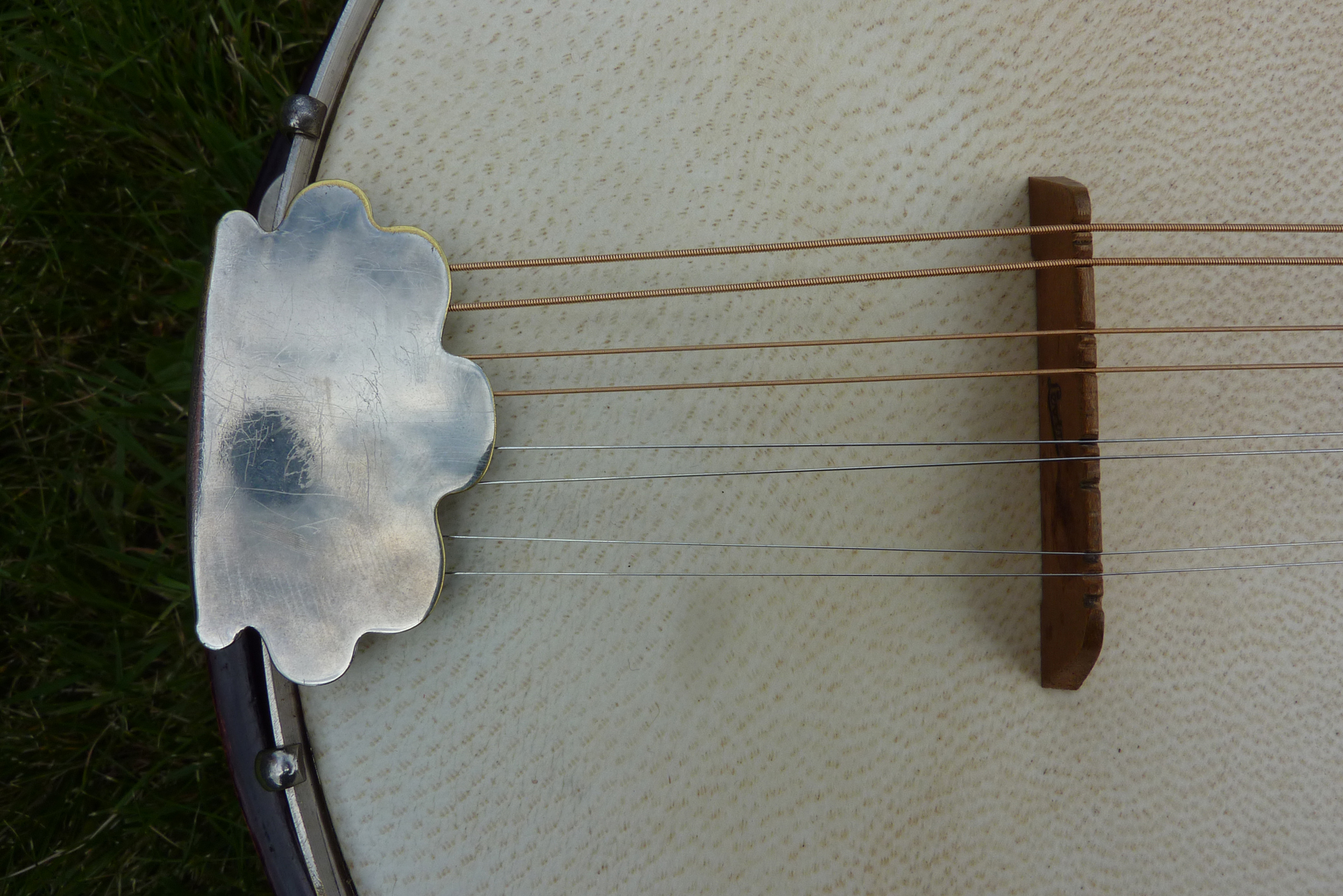 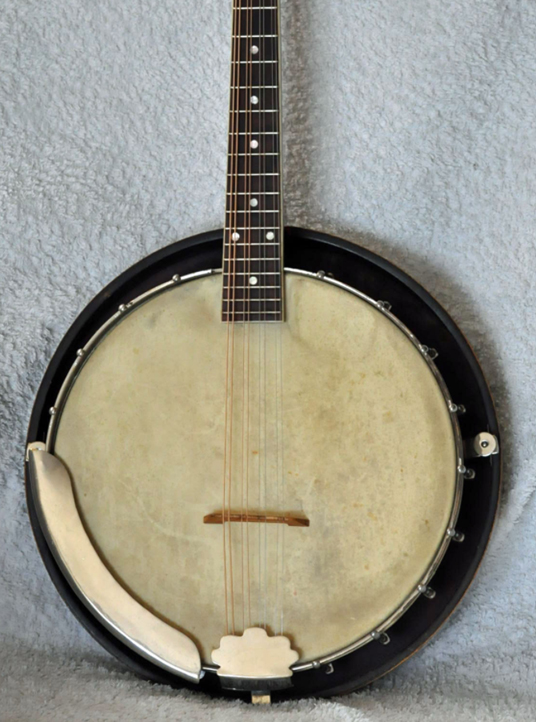 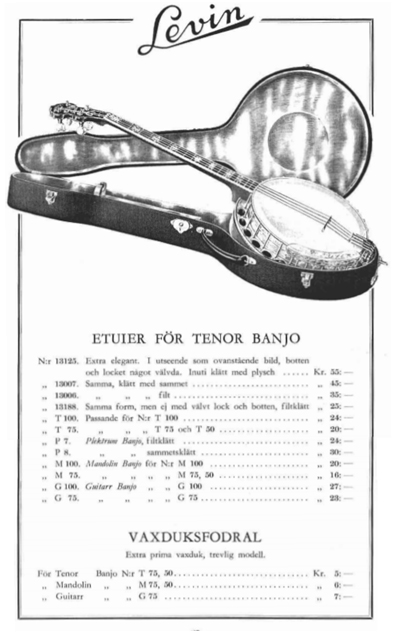 7. Even the strings: gauge and price

The catalog even indicates how much the strings cost (“Mandolin Banjo-strängar”). Two categories: the “Ordinary” (Vanliga) and the “Elite”. The first type costs from 1 :10 to 0 :35, from G to E ; th G ordinary string has the same gauge (12) and costs the same price (A :10) as the A Elite string.

The banjoline was very used from the beginning of the 20th century to 1940 because the manufacturers try to create acoustic instruments with a sound which could be heard without amplification in orchestras, before the birth of electric strings instruments. It was with the same purpose that Emile Grimshaw of Manchester invented in the thirties the Revelation guitar that we also show on this site (https://www.elmored.be/a-rare-grimshaw-revelation-1930s/)

The banjoline would deserve a special inquiry. It was very widespread in Us and Europe, notably in France.